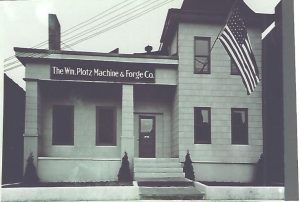 The Wm. Plotz Machine & Forge Company started servicing the Cleveland area in April of 1888 when the founder, Wilhelm Ploetz, a blacksmith, started his own company, The Plotz Iron Works.

The business then was making special dies, tool chisels and a steady supply of horse shoes for the Cleveland Police Department. During this time, Plotz made the brackets that held the world’s first incandescent outdoor lamp fixtures.

In 1917, William Plotz invented, patented and manufactured the “Shur-Stop Guard,” a device installed on emery-wheel machines to prevent injury from flying objects.

In 1922, the first change of ownership occurred when William Plotz died at the age of 75, and the company was run by his two sons, Oscar A. and George T.

While horse shoeing was an important item, the change to a “horseless carriage” provided Plotz with an order for the first tie-rod for the first car built by Henry Ford. Other notable customers were White Motor Company and Peerless Motor Company.

After World War II, the direction of Plotz was changed to repair of just about any type of equipment.

In 1979, William A. Plotz sold his share of the company to his brother Walter Plotz, and his nephews James, Kenneth and Thomas. In 1988, Walter retired giving control to his three sons who are currently running the business. 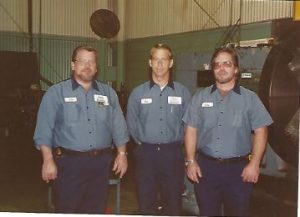 In the 100 years of the life of this company, we have traced progress from shoeing horses in the horse and buggy era; into the growth of the City of Cleveland in the Industrial age; into the age of the Automotive Industry, Municipal and Waste Water facilities.